Big Friday at the Basketball

Big Friday at the Basketball

The Men's tournament is heating up with the penultimate day of the Group Phase offering two blockbuster games with huge implications in the Qualifying Finals next week.

In the first game at 2:15 pm (Samoa time); the Solomon Islands (0-2) and Tahiti (0-2) will face-off to determine which team will advance to the next round.

Polynesia Cup champion, Tahiti is raring to prove their mettle after suffering two stinging losses 66-80 to Fiji and 51-93 against Papua New Guinea.

The Solomon Islands is in the same boat as the Tahitians experiencing defeats to PNG (48-86) and Fiji (44-74).

In the other game; Melanesia Cup rivals Fiji and Papua New Guinea will battle for the top spot in Group B and the outright slot to the Semi-Final round at 4:30 pm.

In their last match-up during the 2017 FIBA Melanesia Cup, PNG stunned Fiji with a massive 83-49 victory albeit the latter was missing key players. Meanwhile, PNG will rely on their balanced attack led by brothers Liam and Lloyd Wright, Martin Leahy and neophyte Conillus Muri who are averaging 13.5, 13, 11.5 and 9.5 points per game respectively.

The country with the highest standing at the end of the Group Phase will get a bye and advance directly to the Semi-Final round while the second and third place team will advance to the next round.

Meanwhile in the Women's tournament

In penultimate day of the Pool A action of the Women's competition the four teams playing can determine their own fate in the upcoming Qualifying Finals next week.

In the first game scheduled at 12:00 pm (Samoa time), the Cook Islands will tussle with New Caledonia to decide the third placer of Pool A and advance to the next round.

FIBA Polynesia Cup champion, Cook Islands will try to avoid early elimination against a determined New Caledonia side; both teams are winless with a 0-2 record and will be hungry for a taste of victory.

The Cook Islands are led by their youth brigade; 17-year old, Te Araroa Sapoaga and 20-year old Ajiah Pepe who are both averaging 16.5 points per game.

Meanwhile, New Caledonia will need to find more support for Yolanda Luepak who's been their leading scorer at 12.0 points per game. 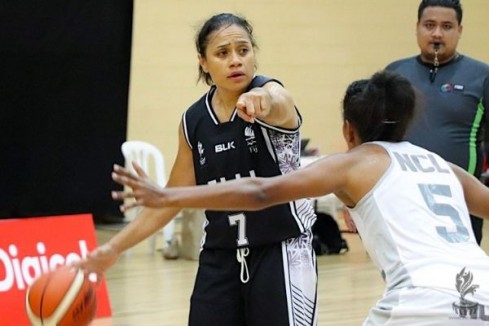 In the last game of the day, host Samoa and defending Gold Medalist Fiji will vie for the top spot and outright Semi-Final ticket of the most prestigious tournament in this side of the world.

Hometown team Samoa has been carried by the legendary exploits of Malama Leaupepe with a monster double-double average of 42.5 points and 16.5 rebounds.

Fiji will rely on the all-around veteran, Valeria Nainima who is averaging 20.5 points, 5.0 rebounds, 5.5 assists and 3.0 steals per game.

Buoyed by their huge crowd support, the hosts will try to seal their Semi-Final appearance but the pride of the reigning champion, Fiji will be a hard task to overcome.

In a tantalizing match-up between two of the Pacific's finest Women players; who will come out on top and lead their team to a victory?

Who will go home? Who will take the top spots? Strap your seatbelts and enjoy the ride.